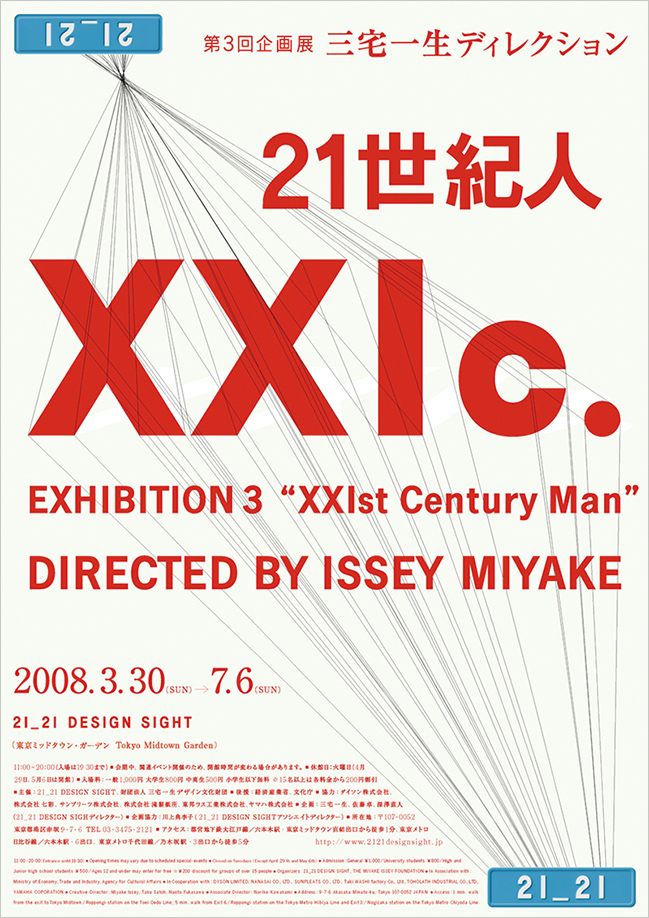 Based on the idea that the earth's environment has reached a crucial point as we plunge into the 21st century, Issey Miyake directed the exhibition by focusing on the 21st century man, who will live out this century. With objects and installation using everyday materials, home appliance parts and discarded paper, and work that focus on the human body and handcraft, it posed questions about the dangers a society may withhold, while at the same time presenting hope and strength for the 21st century man.
Date: March 30 - July 6, 2008

As we move further into the new century, the entire world is facing a turning point: a crisis. Due to an increase in environmental stress, there is a distinct possibility that the way we live, the way we work, and even the way we "are" may change in ways we never imagined. In the "XXIst Century Man" exhibition we took the relationship between the human body and the way things are made as a platform and a starting point for considering and asking how things will be made in the future.

In preparing the exhibition, we looked to work with people who had a common sensibility and who were able to look at the world with wide eyes and open hearts. Together, we experimented with a wide range of methodologies. Our aim was to identify and display 21st Century Man's soul; what people's hopes are and where their power lies, using completely new images. These young designers, artists, and creators have been entrusted with the job of fulfilling many of the dreams of 21_21, which was created as a place in which to develop new modern ways of thinking.

The DNA of "21st century man" already includes creative genes and sensibilities inherited from our 20th century forebears. I have no doubt that there are many designers and creative people who have maintained a pure vision and a willingness to focus upon the future. It is imperative that this specific DNA of creativity be stored in the flesh and blood of "21st century man" and in that of all those who follow. It is only through the miracles of creativity and imagination that this Earth will see dreams realized and new realities can give rise to new dreams. In order for any of this to start, however, we have to create a forum for communication and discussion that includes members of the public and corporations as well. My hope is that this exhibition will open just this kind of dialogue; one that will only continue to grow.

Among the artists who have excited me the most over the years and whom I chose for that reason to include in this exhibition are three pioneers: Isamu Noguchi, Ron Arad, and Tim Hawkinson. Their work, each of which brims with the sense of vitality and energy of an artist whose sights were and are set squarely upon the future. These pieces light up a corner of the "XXIst Century Man" venue not unlike gifts to the next generation.